Re: Figuring FWHP from RWHP ?

midnightbluS10 wrote: ↑
Sat Aug 25, 2018 6:47 pm
While we're on dyno conversions, I've got a question. Hypothetical situation. Say a 500hp car loses 10% through driveline for a 50hp loss. If you increase that engines hp to say 800,why would it now supposedly lose 80hp through driveline losses? Wouldn't it still take the same amount of power to turn the driveline? Why wouldn't it still be 50hp? Would a 5000hp engine then lose 500hp to turn that same driveline? Does that make sense to anyone? I know that people have used percentage loss since forever. Does that make it automatically correct? No. So I figured I'd ask others' opinions.

First, the drive train losses aren't simple frictional losses that produce heat. As a sanity check, 50 hp is 37 kW - picture 37 1000 watt radiant heaters stuffed into the trunk. You might get to the end of a 1/4 mile pass without a fire but a stock car would melt down into a puddle of slag in a couple of laps so it can't be that simple. There are frictional losses in all of the bearings, in the rolling resistance of the tires, and power used to whip up the transmission and rear end lubes, but this all totals about 5-10 hp. It does change with vehicle speed, but not by much. A drag car can pretty much ignore it, and a stock car just adds a differential and manual trans cooler. For now ignore the torque converter if there is one, I'll come back to it at the end. So where does that 50 hp of drive train loss go? Think of all of the spinning parts of a transmission, flywheel, clutch, driveshaft, ring and pinion, axles, and the driven wheels and tires as one giant flywheel. This starts at rest and has to be spun up to some final speed as the car goes down the drag strip, and that takes power that now isn't available to accelerate the car so this power is the drive train loss. It isn't really lost, it is just stored in the rotational inertia of that giant composite flywheel, at least until the car comes back to rest when it gets converted into heat in the brakes. Now think of your 500 hp car and assume it runs a 10.0 sec quarter mile at 136 mph, and say the power lost spinning up that flywheel is 50 hp. Now make it 800 hp at the same weight and gearing so it runs 8.55 at 159 mph. Now it has to spin that flywheel up in 8.55 / 10.0 = 0.855 or only 85.5% of the time, and it has to spin it up to 159 / 136 = 1.17 or 17% faster rpm. Same car but now the drive train loss has grown because it has more hp. I can't say if it stayed at 10% and grew from 50 to 80 hp exactly, but assuming a constant percentage is a simple and not terribly inaccurate estimate.

Now, torque converters filled with trans fluid. They are large and heavy and make a huge flywheel all by themselves and they never reach 100% coupling without a clutch and often don't get below 10% slip until at least 1000 rpm over the stall speed (every brand and size is different, this is the general idea), so they do convert a lot of engine hp into heat in the fluid so the actual frictional losses can be 10's of hp as well - that's why drag cars need such big trans coolers. Plus, the spinning internals of an auto trans make a much bigger flywheel than a manual trans, which with the extra losses involved in driving the pump in the transmission account for the larger drive train losses of an automatic compared to a stick car. 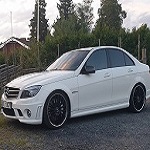